My first assisting job was for Michael Attenborough on The Late Henry Moss at the Almeida, with a brilliant cast on one of Sam Shepard’s great plays. I think he’s a genius, the inheritor of Beckett, and his ritual, rhythmic ways of writing about cycles, family, and the problem of living are as brutal and compassionate as it is possible to be.

Then to the Royal Shakespeare Company, to the assist the wonderful Nancy Meckler on Romeo and Juliet (pictured), to open the Complete Works Festival. 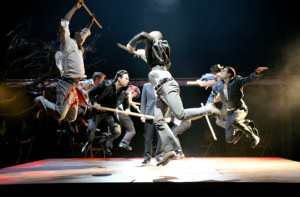 From Nancy I learned the importance of making every line active, and from her I developed my understanding of Shakespeare as transformative. The Complete Works Festival featured productions of Shakespeare from all over the world; whilst working with a talented ensemble, directing understudies on the historic RST stage, in the beautiful wooden Ashcroft Room overlooking Stratford-on-Avon, and adapting extracts of the show for the opening of the Courtyard Theatre (the prototype for the new RST) I found myself rubbing shoulders with artists from India, Sri Lanka and South Africa, and seeing seminal productions including Yukio Ninagawa’s Japanese Titus Andronicus and Tim Supple’s Pan-Indian Dream. A very sunny period in my life! That was also a certain John Heffernan’s first production for the RSC, in the modest role of Balthasar. Fast forward a few years and he starred in Oppenheimer; there’s a company that knows how to nurture its talent.

I worked with Nancy and the RSC again, on the UK Tour of her hugely successful A Comedy of Errors. Once again, even in the silliest of farces, the acting emphasis was on choosing an action for each line (ie trying to use the words to have a clear effect on somebody else) and having the discipline to stick to it. It was a pleasure and a real education to be travelling with such a joyful, and joyfully received show, to some of our country’s flagship regional theatres.

Finally, I assisted Nick Kent and Indhu Rubasingham on The Great Game: Afghanistan, the Olivier-nominated season of new plays at the Tricycle and on tour of the US. This phenomenal project shaped my understanding of theatre and what it can do in the world. Happy hours spent in the British Library (combing dusty tomes for information about the British Empire’s dealings with Afghans from the 1800s) gave way to reams of paper and notes helping out with the dramaturgical development of 15 newly commissioned plays and the question of how they fitted together as three standalone performances as well as a day-long trilogy. And then we were in rehearsals… as well as directing my own work I supported Nick and Indhu in theirs, and managed the rehearsal scheduling for a company of 15 actors in 12 plays with 3 directors in one small building. The following year the production returned, with a new play for me to direct, and went on tour to the USA. More about my work on The Great Game here.