Act for Darfur was a response to a conflict – named by many as a genocide – in the Western Sudanese region of Darfur. An uprising by locals was crushed with extreme force by the Sudanese government and allied militia. Hundreds of thousands were killed, millions displaced, villages burned, vast areas emptied of people, and the conflict continues.

In 2007 a group of artists in London came together to ask how the arts could make a difference. We formed ourselves into ‘Act for Darfur’ and, led by me, produced a major arts festival at the Tricycle Theatre, and a performance and exhibition at the House of Commons.

Act for Darfur: The 11th Hour was a cross-arts and politics festival using every space in the Tricycle Theatre for 11 hours, with the kind support of the Tricycle’s Artistic Director, Nicolas Kent. I produced and Artistic Directed the festival, including securing funding from the Pears Foundation and partnerships with NGOs including The Aegis Trust, Human Rights Watch, and Waging Peace. We programmed film, music, visual artists from Darfur, storytelling, music, craft and culture workshops, panel discussions, newly commissioned theatre, invited artists including the Times cartoonist Peter Brookes, and flew Mia Farrow over to be our keynote speaker.

We wanted to use the arts to bring UK citizens closer to the real people and stories, and empower and inspire them to take action. Our partnerships, programming and communication all shared the following aims: that participants should Learn, Empathise and Act.

In 2008 actors Anna Chancellor and Denis Lawson joined us to read testimonies from Darfuri asylum seekers at an exhibition and event called Act for Darfur: Testimony, produced jointly with the All Party Parliamentary Group on Sudan at the House of Commons. This was aimed at MPs and Lords as part of a wider campaign (eventually successful) to change the laws around returning vulnerable Darfuris to Khartoum.

Here is the cartoon that Peter Brookes produced in The Times, after leading workshops on political cartooning at Act for Darfur: The 11th Hour: 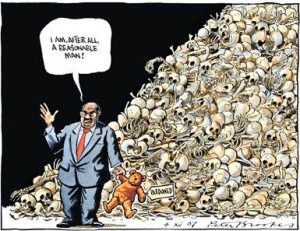 You can listen to the Guardian podcast about ‘Act for Darfur: The 11th Hour’ here

The protest banner we made at the Tricycle, a patchwork quilt featuring hundreds of handprints from participants, has since been used at rallies and demonstrations around the world. Here it is at the UN in Geneva: 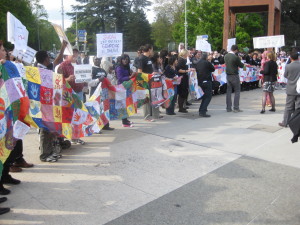