@lukeybarnesy Ooh I think @WilliamGalinsky is from God's own county

@FatSideburns And it's Gut Nacht from him. 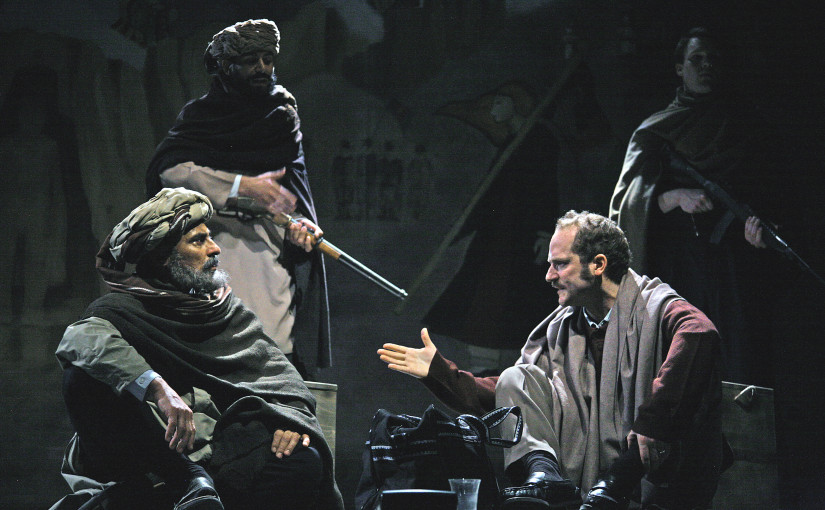 Blood and Gifts by JT Rogers was one 12 world premieres in The Tricycle Theatre’s Olivier-nominated 2009 season of new short plays, The Great Game: Afghanistan. The picture above shows Mujahid leader Abdullah (Vincent Ebrahim) facing down CIA Agent Jim (Rick Warden), watched by Said (Danny Rahim). The lighting is by James Farncombe, the design by Miriam Nabarro against a mural by Pamela Howard, and the photo was taken by John Haynes.

“Oh, East is East and West is West, and never the twain shall meet,
Till Earth and Sky stand presently at God’s great Judgment Seat;
But there is neither East nor West, Border, nor Breed, nor Birth,
When two strong men stand face to face, though they come from the ends of the earth!”

This quote from Kipling, as well as the idea of transactions or ‘deals’ from Bernard-Marie Koltes, helped me understand the play. Through the medium of the ‘deal’, two strong men form a union despite border, breed and birth. But how long can these deals last? how deep do the unions go? and what happens if they fall apart?

The play is set in the 1980s and traces the CIA’s relationship with the Mujahideen from life-theatening first contact, through established suppliers of weaponry, to the fallout of the Soviet defeat. Today, the question of whether to intervene or to arm rebel groups around the world remains a major issue for foreign policy, and the play retains all of its power.

Directing Blood and Gifts is a highlight of my career. The writing was masterful, the actors equally so, and performing it with an ensemble as part of a new history cycle sparked explosive connections between all the plays.

In fact, Blood and Gifts was such a success that it was snapped up by the National for a full-length production the following year. It was replaced in the 2010 revival and US Tour of the season by the world premiere of Lee Blessing’s Wood for the Fire, which I also directed.

The cast for Blood and Gifts included: