@abdulrazzak hello hello got a couple of science-y artists for you to check out. Not Quite same as you but here goe… twitter.com/i/web/status/1…

Oh dear. I think I may have had some for 10+ years. twitter.com/BootsUK/status…

@leonfleming Perhaps you have one already but can't remember? 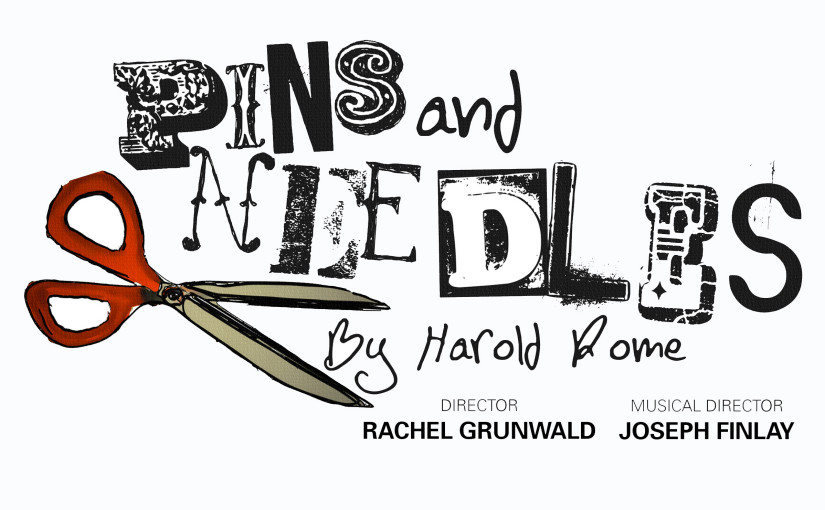 Pins and Needles was a Broadway phenomenon, the longest-running show of its time and the only hit musical ever to be produced by a labour union. It is a satirical musical revue commissioned by the International Ladies Garment Workers Union in New York in 1937, conceived as an amateur entertainment for and by their members. Within a fortnight it became such a huge success that the cast left their factory jobs, joined Equity and became part of Broadway history.

During its record-breaking run Pins spoofed everything from fascist dictators to advertising scare tactics and income-tax dodgers, in an explosion of songs and sketches that were constantly updated to reflect changing events.

75 years on, with Musical Director Joseph Finlay, I directed the UK premiere of Pins and Needles, which took the theatre scene by storm, winning rave reviews and being hailed by Time Out as their Critic’s Choice and Hit of the Year on the Fringe. The big-state vs. small-state divide at the heart of the show translated with breathtaking (and heartbreaking) ease to today’s politics.

And we want to do it again! We’re looking for partners for a bigger, even more entertaining and even more hard-hitting version of Pins and Needles. If you are a producer or a theatre company interested, please Contact Me.

The response to the show, from audience and critics, was extraordinary:

A left-wing polemic effortlessly in tune with the frustrations at banks, politicians and big business that have boiled onto our streets of late, it is also funny, stylish and pacy, with persuasive singers and strong comic actors. If you prefer your musicals feelgood, well that’s fine: little has changed since ‘Pins and Needles’ was written, but its anti-establishment potshots are ablaze with optimism and working-class pride. A musical for our time.”

“It’s a smart move to resurrect Pins and Needles now. A witty Depression-era revue that satirises New Deal-despising right-wing politicians, the greed of devious tax-dodgers, and union-bashing speaks directly to our own recession-hit times of savage government spending cuts and rising protest.

There are moments where the production, staged throughout with droll flair, makes the parallels overt. A cycle-helmeted Boris careers in to sing “It’s Not Cricket to Picket”. In one skit, a couple of Republicans who believe that “every American has the right to starve without interference from the Government” hit on the idea of “the Big Society” as an election slogan. But you also get a flavour of the era of the Federal Theatre Project and the WPA. The show manages to be both larky and passionate.

I don’t see how Grunwald’s delightful, idiosyncratic cast could perform the material better, whether revelling in the irreverent wackiness of “Four Little Angels of Peace” (a musical elimination game for fascist dictators) or capturing the poignancy of a song that asks “What Good Is Love?” when you have almost nothing to give. Recommended. 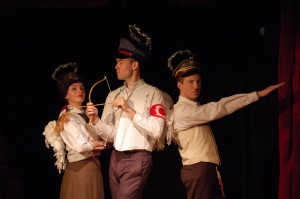 Here are the three of the “Four Little Angels of Peace”, assuring each other that ‘There’s really no harm if we do not disarm/ For we’re really in close harmony” (the fourth Angel is lying on the floor out of view, with an arrow jammed where the sun don’t shine).

And here is the ballad at the heart of the show, ‘What Good is Love?’, by Harold Rome, sung by Rachel Rose Reid:

The tunes are brilliantly hum-able, the satire biting and the performances sizzling.
from Thoughts of a Theatre Girl

This is an enormously enjoyable production that could fill a much larger theatre.
from The Socialist Review

Pins and Needles is endlessly relevant and entertaining today… The choreography is ironic, beautiful and effective…Superb production values… I was impressed, in stitches, and wanting more. Best Musical on the Fringe.
from Remote Goat

What better way to change the world than through the power of song and dance? … Managing to be both entertaining and politically on-the-button, Pins and Needles is an ideal musical for current times.
from The Public Reviews

Pins and Needles was designed by Samal Blak with costumes by Heather Judge and Libby Todd. It was choreographed by Nicola Martin and Josephine Kiernan. The Assistant Musical Director was Andrew Charity.

It was produced by Good Night Out Presents with help from Matthew Gould.